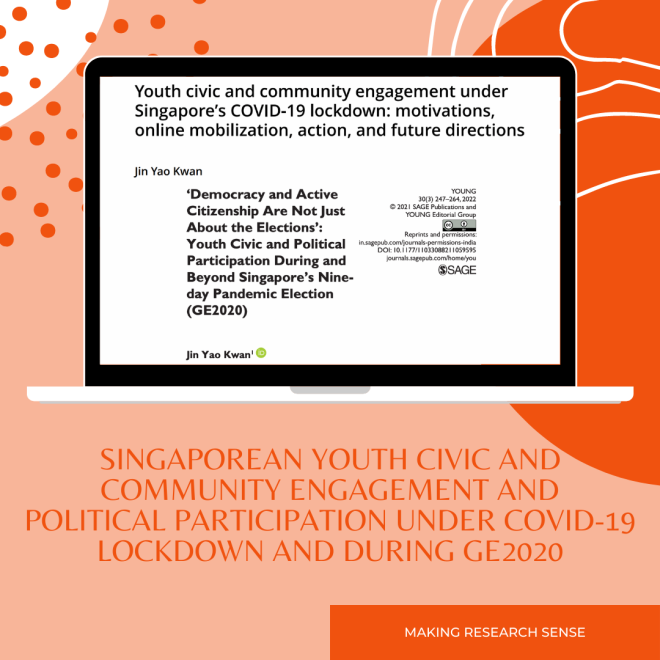 On this podcast, I’ve traditionally featured the research and social work and projects of others. I make a small exception today, because I want to share about two recent research journal articles I’ve published, which, I think, in an interesting fashion, draws from earlier episodes I produced for past seasons of this socialservice.sg podcast. I’ve divided this episode into three parts.

In the first part, I explore the first paper, titled: “Youth civic and community engagement under Singapore’s COVID-19 lockdown: Motivations, online mobilisation, action, and future directions”. This paper draws directly from socialservice.sg’s first season, “COVID-19 Community Chronicles”. After Singapore announced the first circuit-breaker, from April 9 to June 24, 2020, we had guests running community initiatives, some of whom talked about structural or systemic issues.

In the second part, I feature the second paper. It’s titled, “‘Democracy and active citizenship are not just about the elections’: Youth civic and political participation during and beyond Singapore’s nine-day pandemic election (GE2020)”. “The Nine Days”, was socialservice.sg’s second season, and the season was titled as such because that was the length of the general election campaign period. From June 30 to July 11, 2020, we solicited youth views on election issues and candidates and their thoughts on the election.

And in the third and final part of this episode, very briefly, I summarise the key findings and reflect on the potential of podcasts – in Singapore and beyond – to bridging research, practice, education, and policy. Parts of this episode were adapted largely from a June 2022 seminar I delivered, as part of the AcademiaSG Junior Scholar Seminar.

This episode is part of the “Making Research Sense” series of the podcast’s fifth season (https://socialservice.sg/podcast/).